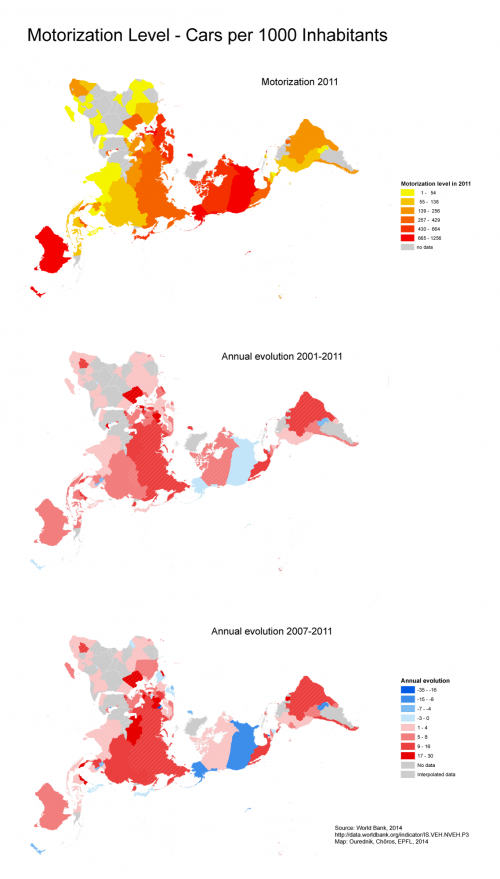 Is our society evolving toward a post-car world? Among reasons for dropping car sales in the World are the reversal of the urban sprawl trend, the development of public transport, the reallocation of urban space to bicycles and pedestrians, the development of car sharing facilitated by new communication technologies or a cultural shift among younger individuals, related also to a heightened awareness of the impact of car traffic on the environment. A general decline of the use of the car is foreseeable in the near future, but how near exactly? And where?

Globally, there are 2 cars less per 1000 inhabitants between 2007 and 2011. The maps above illustrate motorization levels per country and its evolution, according to World Bank data. Most striking is the decline of cars per 1000 inhabitants in the following countries, among which the most motorized ones.

Over a longer period, between 2001 and 2011, however, the per 1000 count rises by 2 worldwide. Despite the more recent decline, motorization levels in many countires never sank below those of 2001. The question is, thus, whether we should link the more recent decline only to the 2008 financial crisis, or interpret it as a signal of a nearing “peak car”. Let’s see the actual evolution of the demotorizing countries.

Clearly, San Marino, with over 1300 cars per 1000 inhabitants, lies outside of the standard. Its motorization level, nevertheless, shows a steady decline…

Then, for the eight most motorized countries with sinking motorization leveles between 2007 and 2011. 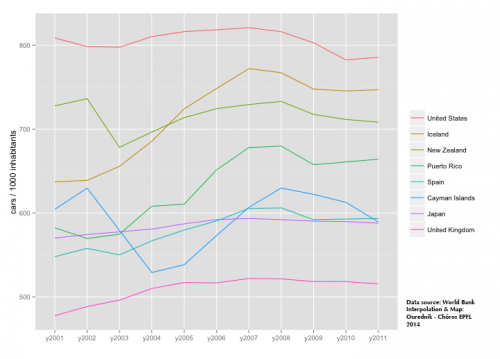 The eight countries with median motorization and the World: 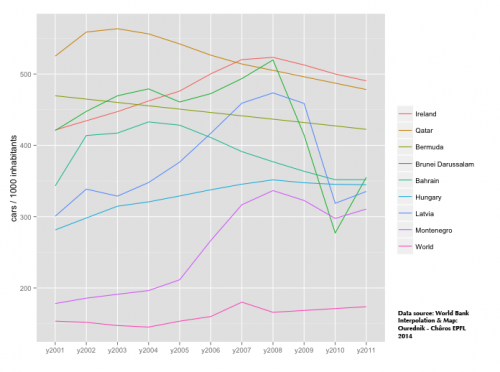 Among the least motorized countries, the slowest decline takes place in The Ghana and Gambia (only -0.4 and -0.3  between 2007 and 2011). In Burundi, -1.3. Motorization levels in all other African countries for whom data are known are rising. In April 2014, Johan van Zyl, Toyota’s CEO for Africa declared the continent “a growing market”. Nicaragua and Paraguay show the most dramatic decline, obviously related to the financial crisis. (Latin America was witnessing its fastest rate of economic growth in 30 years when the crisis hit) : 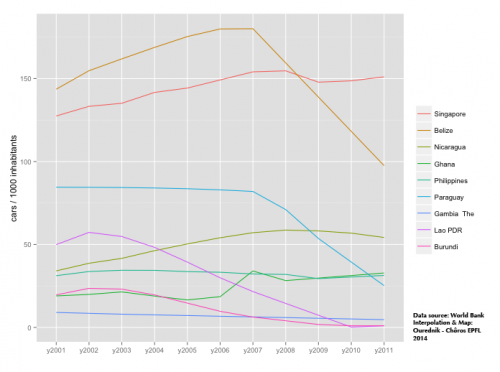 ArcMap for the Burkminster-Fuller map projection and the original map.

Adobe Illustrator for the final production.