The environmental and urbanistic reasons for getting rid of private individual car need no more to be listed. Known under the name of podcar, a promising car replacement solution consists of a driverless vehicle, usable on demand, and guided by an automatized navigation system (GPS, local terminals or combinations of both). It has first appeared under the name “ULTra rapid transit” at Heathrow terminal, and has since been implemented for example in the experimental city of Masdar (Abu Dhabi, 6km2, 50’000 inhabitants, 1500 businesses, projected in 2020), and is about to be in in Milton Keynes.

« each pod will have enough space for two passengers and luggage and will travel up to speeds of 12mph. The pods are powered by electronic motors and will initially be given their own lanes, though there are plans to remove these once residents have become accustomed to the technology. The pods will be used to ferry passengers between the train station and shopping centers and offices a mile away. Each journey will cost £2, with the project expected to generate £1m of revenue in the first year, and costing a total of £65 million. […] Twenty trial pods will be introduced in 2015 with steering wheels or joysticks to control them. The full, driverless system will hit the streets later in 2017. The vehicle to be employed has yet to be confirmed, but one in consideration is the EN-V Pride, an urban electric concept car developed by General Motors and Segway. » (Vincent. 2013)

Implementations in larger – and more realistic – settings are yet to be observed. Cities, in a highly urbanized world, should grow on the top of cities.

Beyond the human driver

In its concept, the podcar goes back to the 1950s. A first system of this kind has been built in the 1970s in Morgantown. Today, it can be considered as a logical consequence of a global tendency to digitally restrain some of the autonomy of drivers for the sake of comfort, security, energy use optimization and traffic flow: early warning systems, on-board GPS, parallel-parking assistance, integrated alcohol-level controls and other devices already guide drivers towards a better use of their vehicles (cf. Dennis/Urry 2009 155ff.) For RoadPricing purposes, a compulsory tracing of vehicle routes seems necessary at Europa-wide level (Maggi/Geninazzi 2010, 134). Other projects, such as the development of automatically enforced speed limitations (LAVIA), or the adaptation of vehicle autonomy with regard to other traffic partners (EPFL|TRACE) are under development.

Concerns about loss of drivers’ “freedom”[1] in this context are outweighed by other facts: 1) inefficient driving increases energy consumption and environmental impact of car use; 2) 1.24 million humans die every year due to traffic accidents (cf. WHO 2013). Both aspects are significantly improved by replacing human steering by automatized systems.

Beyond the private car towards individual public transport

The main aspect of the podcar is that it overcomes the car as an object of private property. Podcars are not owned by their end users but are rented by the transportation companies. Subscriptions, or trajectory-based fees, can be envisioned: they’ve already been fine-tuned by car-sharing companies like Zipcar or Mobility. Getting rid of the privately-owned car means reducing the global car fleet of the city, thus reclaiming large portions of public space currently used for parking. The Smart Cities group at the MIT is specifically working on that aspect, with a proposal of stackable podcars. Even private space (owned, for instance, by corporate buildings) could be used in a more appealing manner, considering that « employees office cubicles are [currently] smaller than the space devoted to their cars » (Graham&Marvin 2001 citing Dunham-Jones 1999, 6).

The movement from vehicle ownership to vehicle rental is also part of a more general movement from an unsustainable economy of property to an economy of access. Programmed obsolescence of manufactured objects – the main environmental and social plague of our epoch – can only be overcome in this manner. The car being a manufactured object par excellence, its extraction from the property paradigm shall lead to unprecedented positive change in this respect.

Getting rid of the privately-owned car also means bridging the social divide in terms of accessibility of spaces disconnected from mass-transportation networks. It also alters the relations of dependency between space users (children, elderly)[2] and car owners, removing both the weight of responsibility and leverage of power from the hands of the latter.

However, lack of property also means the impossibility, for end users, to customize their mobile space: music collections, cup-holders, lucky charms, odor diffusors, seat coatings etc. are as many elements of individuation of the lived space, that provide a sense of security and homeliness in the car. For many, the car constitutes a moving entrance hall to their own homes, an air-lock between their professional and their private lives. The individual need for such an intermediate space should not be underestimated. It is, in fact, substituted for even in public transport. Books, mobile music players, noise-suppression headphones are as many elements of a privacy bubble in the midst of a crowded public space. Other means of personalization could be though of with respect to the podcar. One could for instance imagine USB or Bluetooth receptors allowing end-user to personalize the interior of podcars, by means of “skins” recorded on their own mobile devices, consisting of ambient music, particular colors of diode lighting, and other personalization dimensions that could yet be thought of. Beyond simple gadgets, such possibilities can be determinant for the attractiveness of a podcar solution for longer distance traveling.

Public space and other co-spatialities

Contact in public space, the possibility of a spontaneous encounter, urban dérive are not possible in the private individual car. To what extent they would be in a podcar scenario must be thought of. One could for instance imagine that podcar units used bellow their capacity be allowed to take on board other passengers with identical destinations. Hubs in which podcars meet and convert to spaces of interpersonal encounter can also be conceived. The layout and the set of public services in main podcar hubs are, in this perspective, an interesting challenge for urban and architectural design.

One could further think of telecommunication between podcar units, and of the associated layout of the podcar interiors. Connection and intercommunication between vehicles carrying a number of passengers exceeding the capacity of a single podcar unit shall redefine the modalities of “traveling together” of larger groups. Families with children, for instance would travel in separate units, giving rise to situation of semi-privacy for different family members, physically detached, but connected by an audiovisual information flow.

A podcar solution would change urban design in many ways. On the one hand, its advantage lies in its ability to use the existing road network infrastructure (cf. Robert 2005, 19). This is also a disadvantage in some sense, as other mobility solutions, such as the bicycle, would rather restitute urban space used up by the traffic infrastructure to pedestrians. Speed adaptation of the podcars in a shared pedestrian/automotive space, though, could offer a compromise.

One of the most impressive changes would probably occur on urban crossings, no more regulated by traffic lights or (space-consuming) roundabouts, but by computer-regulated traffic flow. The situation has been well illustrated by Badger (2012). Nevertheless, podcar crossings also point out the extreme vulnerability of a complex automatized vehicle system to software failures and cyber-vandalism (Robert 2005, 20). The worst outcome of such failures could consist in large-scale fatal accidents.

Automated driving systems also raise the issue of data protection. In them, the movement of any individual – a fortiori the movement of any podcar service subscriber – is totally traceable. Beyond rises the specter of what some authors call an Orwellian dystopia (Urry 2007; Dennis/Urry 2009). 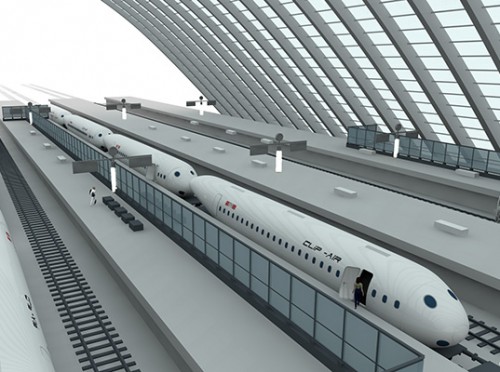 Beyond a range of 30km, a podcar system by itself would hardly offer a satisfying solution in terms of travel time. One could, however, imagine an integration of podcars to other transportations devices. Cargo trains already offer a possible model for this: freight units (containers) are moved from trucks to rails at a collection points, then transported to a diffusion point. In a similar fashion, standardized podcars could be collected on rail. In this fashion, interurban mobility from door would occur seamlessly, with no modal change for the end user.

On longer-distance, airplane integration could be imagined in the same fashion, in reference to the models of Clip Air or Horizon System, already envisioning a combination of air and rail transport.

The podcar does not solve the energetic issues of transportation, its role in the stimulation of a public space is questionable, and it only partially solves the question of land-use by roads in urban environments. It does, however, offer a viable alternative to privately owned cars and to (fatal) human errors in traffic.

[1] In fact, is freedom is to be conceived, according to the definition of General Motors’ vice president Larry Burns, as the « autonomy to go anywhere I want, any time I want, with anyone I want, carrying whatever I require » (2002, cited in Finch 2006), the podcar serves its purpose. Its only restriction pertains to the actual steering of the vehicle.

[2] For an example, in France, 60% of mobility accomplished by children between 5 and 10 is accomplished by car (Robert 2005). In Switzerland, 5% of all trips (including car but not only) are made for the purpose of accompanying (OFS 2012).

One reply on “A post-car world with the PodCar”