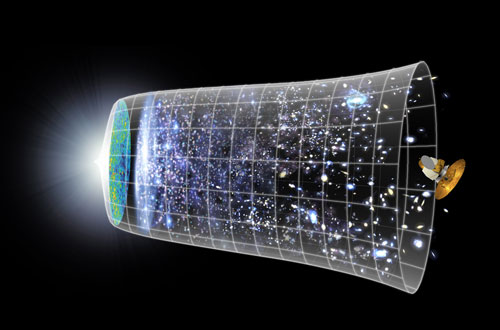 A cosmology is the science of the human position in what the Greeks called the cosmos: an ordered universe in space and time. The Greek word cosmos also means army.
Even our physicists still conceive cosmoi, and make maps of them. One of these maps shows a universe unfolding in time like a living being. A continuous succession of planes, from left to right, illustrates its expansion and its successive states, over a period of about fourteen billion years.  The first plane, on the far left of the map, is reduced to a point. The following plane has a significantly expanded scope; we understand that a bang took place. Colors abound in the area, with red, yellow, bluish and turquoise tints. Then the lights go out. A silence of a half a billion years befalls the universe. In the next plane, a light mist appears again, this time white. Stars are isolated, they condensate, the expansion of the universe slows down. An explanatory note states that the gravity of the material things, which attract each other, now works against the initial expansion movement. Recently, a second acceleration of the expansion took place, however. It is supposedly caused by dark energy, awakened from a long sleep. For 13 billions of years, it had merely contained the stars and planets, like an invisible dough, now it swells, it takes up more space and the things caught inside it are moving away from each other. A stellar probe, a human work, floats a little to the right of the last plane, i.e. slightly ahead of time, and shows in this way that research will reveal more. 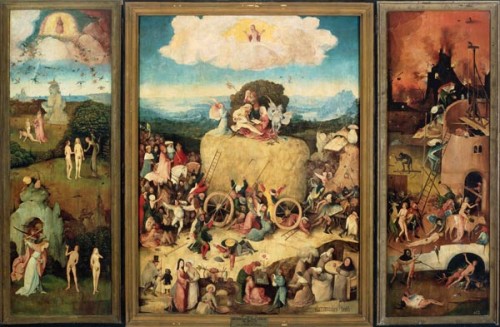 In 1502, Hieronymus Bosch painted a triptych called Haywain, transmitting a similar idea. The left panel shows Paradise and the Original Sin. There are then only two humans on earth. The central panel displays a great quantity of individuals. They talk, sing, touch, argue and fight. They carry a huge wagon of hay. Dark vice is dormant, expressed only here and there. In the right panel, however, it takes over. Isolated individuals are dragged by demons across an icy hell.
Cosmology, as said, is a schematic picture of the place, and of the direction of humans in the universe. Between the beginning of the 16th century and today, the direction seems surprisingly constant. Gustav Jung would explain this constancy by saying that cosmologies are projections of individual human fates. To admit it, we, no less than 16th century man, know the naïve, ecstatic and somehow guilty spring of youth, the slow, mostly interesting, sometimes tedious epoch of the adult age, and the feeling of our bodies getting cold, as entropy takes over, also over us, as we get old, like our cosmologies.