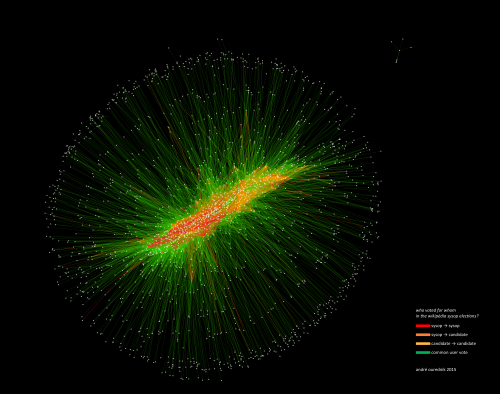 The word reality derives from the Latin res, the thing, but it is also related to réalité and roi, the kingliness of the king. What is real and what is real? That is the question when the reality of things becomes determined by their existence on the Internet. This existence, in turn, is subjected to the power of search engine operators. If Google decides, your page doesn’t exist. Wikipedia often appears as the first Google search result for any thing (or person or institution…). It is in position of deciding about the reality of that thing: what is true about it, what is false, does it exist at all.

Wikipedia could be seen as one of the mighty kings of reality, or perhaps a court of nobility: in the French speaking Wikipédia, for instance, there are 170 sysops empowered to take the last word in any discussion about the content of the encyclopedia. Anybody can contribute, but which contribution remains, or not, largely depends on sysop decisions.

This it not necessarily shocking: it has become a truism to say that any human activity lead in groups develops sooner or later into a hierarchical structure.

But since the top of this structure is occupied by sysops, we should know whether we are now dealing with a representative democracy or, as hypothesized, a feudal court of the Ancient Régime, in which power depends on influence within the court members, rather than taking its legitimacy from the base users: the contributeurs. An intermediary hypothesis lies in a comparison with the Convention nationale, partially elected by the partially universal vote of the literate males of the first Republic, and sentencing, among others, Louis XVI to the guillotine.

This experiment could be made in any local Wikipedia, of course, but the centralistic history of French politics makes this particular example the more interesting. More so, even, the encyclopedic ideals of French revolutionaries like Saint-Simon.

To run the experiment, we can consider the current sysops of francophony, as listed in the Wikipédia sysop list . The question is: who elected them? Other current sysops? Other sysop candidates? Or were they elected by the mere contributeurs? This can be answered by considering data from the sysop polls (January 2015): 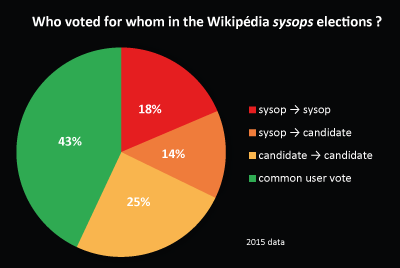 There have been 42’232 single votes, of which 27’109 approvals in favor of sysop status. Of all the “yes”-votes, 43% have been given by common contributeurs. The remaining 57% of status approvals were either sysop candidates voting for other candidates, or votes made by sysops in function. How does this reflect the demography of Wikipédia? Hum… considering that there are 170 sysops and 2’087’000 contributeurs (of whom 15’500 have shown real activity in the last month)… an analogical proportion of non-sysops taking part in a vote should rather be 99.992%, or at least 98.9%.

A representation of the network of yes-votes gives a better view of the underlying structure of mutual political support:

The network is represented in a force directed layout, similar to the one used in my analysis of the mobility of Valais. The one thing to know about the algorithm used for this representation is that the Wikipédia voters move closer to each other if they are linked by a vote. This also means that the closer to the center the voters are, the more often they have voted or been voted for. Red and orange colors are used for links (i.e. votes) between sysops ad sysop candidates. Thus, the red center of the figure attests for a strong mutuality in sysops votations.

The most “democratically” elected sysops would find themselves on the periphery of the network’s heart. Let’s have a closer look. 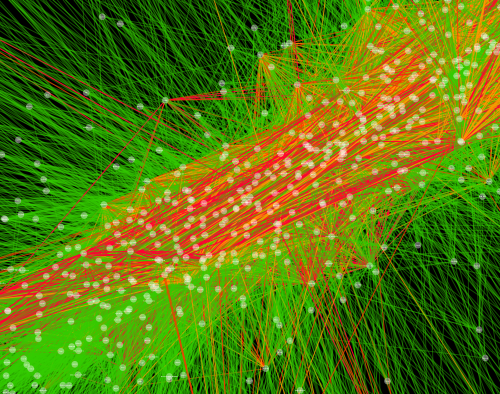 One of the most “democratically” elected sysop seems to be Rome2, elected by collective of 67% contributeurs, 29% of other sysops and 4% of sysop candidates: 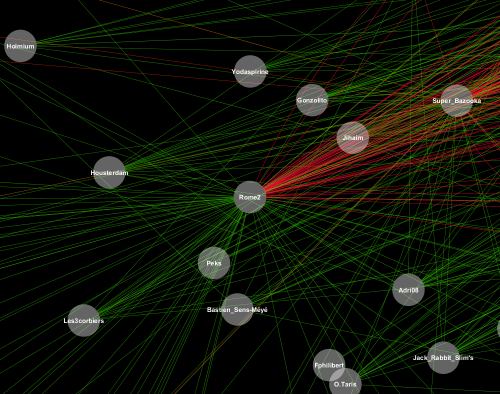 One of the least “democratically” elected sysop seems to be Akeron, elected by a collective of 50% of other sysops, 35% of sysop candidates and only 15% of contributeurs:

Obviously, the heart of Wikipédia power consists of a rather tight, though not exclusive network of mutual electors. The next question is whether this network itself is structured into political wings, parties, cliques…? Suppresionistes vs. Inclusionistes, Jacobins vs. Girondins? The linear form of the network’s center suggests some kind of political tension in the heart of the encyclopedia, but the posture of individual sysops is hard to analyze from mere quantitative data. The following figure keeps the identical layout, but shows, in red vs. green, the ratio of suppressions [aginst all administrative interventions] for each sysop. The circles’ sizes account for the intensity of each sysop‘s work, expressed in the total of days in which he/she has contributed at least once: 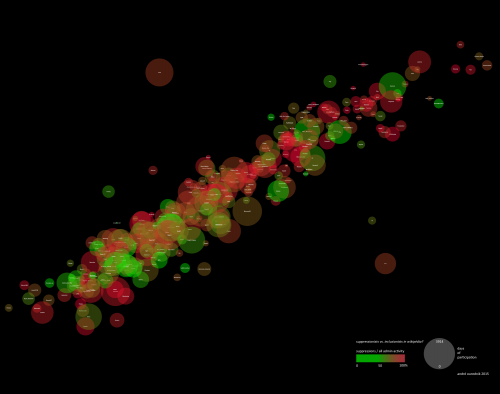 Though green light sysops, less focused on suppressions, seem to concentrate in the lower left part of the figure, this concentration remains relative. Another logic of political dichotomy still needs to be discovered. This reaches beyond the scope of this brief paper, though.

As said, the heart of Wikipédia power consists of a rather tight, though not exclusive network of mutual electors. This situation is not dramatic, but should be taken seriously enough, insofar as Wikipédia has become a primary source of information for a growing number of people.

Of course, nobody prevents any user from becoming a contributeur and the voting procedures are open for all to participate. Few people, however, know about them. At the present point of its history, Wikipedia should consider taking proactive steps towards a more representative governance. For example by promoting participation to the sysop elections. Or by requiring a minimum proportion of contributeur voices. Otherwise, its revolution of information could suddenly remain stuck half way between reverence towards authority of the medieval scholastics and our future of cooperative human knowledge. Whatever happens, l’Encyclopédie, c’est nous!