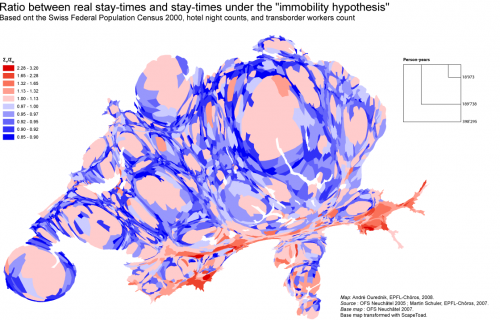 Counting how many people reside at a given address might just not be enough to understand a territory of mobile individuals. Instead of counting people, I count their “stay-times”. In other words, I sum up the time spent by people in each place.

The map above compares two results:

Both ΣH and ΣT are calculated in minutes. If ΣH of a commune is divided by the number of minutes within a year, we get the residential population of that commune.

The lowest ΣT/ΣH-ratios are registered for peri-urban communes. Obviously, people who sleep in these actually live elsewhere.

The highest ΣT/ΣH-ratios are registered in the cantons of Valais and Graubünden mountain resorts. In most extreme cases, tourists triple their population. Urban centers have “only” up to 30% more dwellers then resident-counts would suggest, but their ΣT/ΣH-ratios are systematically positive.

These population differences are important for many reasons, among which infrastructure costs. Shouldn’t peri-urban regions contribute more to the financing of urban centers?

Mapping tools: ArcMap, ScapeToad (for the anamorphosis) and Illustrator.