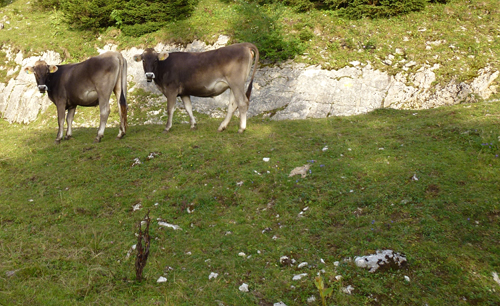 “Nothing will benefit human health and increase chances for survival of life on Earth as much as the evolution to a vegetarian diet”, said Albert Einstein. This might also the answer to the questions discussed this Wednesday, September 19th in the Swiss parliament (both in the Conseil National and in the Conseil des États). “Food sovereignty” – coined under that name in 1996 by the global peasant organization Via Campestina – shall be the theme of these discussions.

The two faces of food sovereignty

Of course, the question of food sovereignty in Switzerland takes very different tonalities than it would in Africa, Latin America, or South Asia. The country’s economy is overwhelmingly dedicated to the tertiary sector, it is flourishing in comparison to its European neighbors, and its population isn’t certainly exposed to problems of famine or malnutrition in the near future. The question of food sovereignty is therefore more linked to the conservation of agriculture as a mode of life, and as a part of the commercial image of a rural Switzerland that, in effect, has worked as a great touristic attractor for more than a century. This also implies that the Swiss question of food sovereignty will have nationalistic undertones next Wednesday, since the national mythos is deeply rooted in the country’s agricultural past. This mythos also bears the memory of the “Wahlen Plan“, an agricultural program set up by the Swiss polititian Friedrich Traugott Wahlen in the years preceding and during WWII, in order to prevent war-induced food-shortage (the program never achieved more than 59% of food autarcy).

Besides this relativization of the question in the Swiss case, one could generally ask whether a discussion on food sovereignty really has the entire place it needs in the national parliament of a single country. World climate change and population increase, factors of dominant impact on agriculture, are matters of planetary concern, and the question of food can only be efficiently discussed at that scale. Highly varying scenarios in terms of food productibility in diverse regions of the world, including Switzerland, can also be imagined: in the long term, national retrenchment might turn out being a very bad strategy.

On the other side, the industrial world has reached an unprecedented degree of exploitation of remote lands. Nation states that now discretely compete for the fertile soils might one day end up in open conflict. Land grabbing, the newest practice in terms of externalization of the agricultural production, reaches extraordinary proportions in low GDP countries, notably in Africa. As an example, 400’000 hectares of soil are rented in Soudan by the US-based company Jarch Capital (source: International Food Policy Research Institute). China rents only 300 hectares to Tanzania for its rice production, but also 5 millions of hectares to Zambia and Congo for making biofuel: another practice in contradiction with the food sovereignty of our planet. The Swiss company Addax Bioenergy participates in the phenomenon by renting 14’000 hectares to the peasants of the Sierra Leone.

The question of food sovereignty is thus mostly interesting if asked in terms of slowing down the agricultural expansiveness of certain countries, to which Switzerland belongs. Thinking about how to cease to live beyond the means of one’s soil could also be seen as a way of maintaining world peace.

Some numbers and the question of meat and milk

Now, biofuel kept apart, a weighty factor in the Swiss agricultural needs is the consumption of meat and dairy products. For every five human inhabitants of Switzerland, the territory also counts six chickens, a pig, and a bovine. In 2010, Switzerland produced 500’000 tons of meat, half of which pork, as well as 4 millions of tons of milk. This sums to 55 kg of meat and almost 500 liters of milk per capita. But the average Swiss consumes more than that and, by this choice, forces himself to import meat, notably poultry, of which more than a half comes from abroad (sources : Union Suisse des Paysans ; Office Fédéral de Statistiques).

Even the meat produced in Switzerland has something imported in it, since the animals are partially fed by matters coming from abroad. The importations of hay, for instance, have reached record level last year with 167’000 tons. To this, add 282’000 tons of soja press cake (tourteaux de soja), 91’000 tons of forage corn, 68’000 tons of forage rice, 62’000 tons of forage barley (orge fourragère), 42’000 tons of colza and sunflower press cake as well as other matters (source: Fédération Suisse des Producteurs de Céréales) ; in all more than a million of tons of vegetal (and animal) matters imported to feed cattle.

This need to import is all the more impressing if you consider the extent of indigenous production of forage: 32 millions of tons, whose culture uses 70% of the Swiss agricultural surfaces (surfaces agricoles utiles) without counting the part of bread grains that actually end up in the stomachs of livestock. Most of those agricultural surfaces are natural or artificial prairies, half of which are situated in a zone of plains and hills, where many other cereals or vegetables could be cultivated. In other words, « there is some leeway », and a significantly higher degree of food sovereignty – whatever its ideological foundations – is plausible… under condition of absorbing less meat and dairy products. Holmes (2011) suggests that, worldwide, 21% land of agricultural surface (3,4 millions km2, i.e. the surface of India) could be spared if we adopted a vegan diet.

Switzerland counts 8 million of inhabitants today, and will count 10 millions in 2050. The planet will probably breach 9 billion at the same date, with growing inland demand in today’s food-exporting countries. If the Swiss maintain their current diet, the need for a massive importation of meat and forage will become both more insistent and more difficult to organize. It is a good thing to reflect on how to change course. In this respect, a debate on food sovereignty might be a good training for our phantasy. To seriously envision this objective would certainly require an intensification of the discussion between dieticians, peasants, land planners and agronomers. One of the astonishing facts that becomes visible in the figure below, for instance, is the relatively small amount of meat being consumed, in comparison with cereals and vegetables, considering the extent of its import and the amount of space allocated for its production. One can also observe the much greater energetic conversion of cereals. Unfortunately, publicly available data of the Swiss Federal Office of Statistics doesn’t say what part of the actual tons of food are being imported or home-grown. Nevertheless, 32’000’000 tons of home-grown forage, compared to the only 3’600’000 tons of vegetal food consumed every year by the Swiss, seem to leave some margin for land-use conversion…

If what the numbers suggest is true, the solution to food sovereignty consists neither in a raise in indigenous food production advocated by right-wing parties, nor in a radical decrease of consumption advocated by the radical green left, but in the optimization of consumption with regard to overconsumption of meat and dairy products. We should be able to tell how many hectares of crop of which type are needed to provide the human bodies of 10 million of citizens with everything needed for a healthy life, as well as how to organize the culture of these crops in order to avoid soil degradation under the specific climatic and conditions of Switzerland. If the idea of food sovereignty is to be taken seriously, research projects in this sense must be concluded in the near future. The expected outcome is not to impose a technocratic solution to human diet but to get a better perception of what part of food importation results from necessity and what part from a particular diet choice.

Hopefully the debate of the National Council will not sink into obscure nationalist concerns. But if one absolutely seeks a Swiss specificity, it can best be found in the low relevance that vegan or strictly vegetarian diets would have in the country. Half of the usable agricultural surfaces remain in alpine zones, unfavorable to the culture of cereals or vegetables, but favorable to pasture and forage production. A possible model of a « Swiss sovereign food diet » would then be a vegetarian one, embellished by occasional meat and dairy from the Alps. Meat would become a pleasant luxury and a social gathering around the event of its preparation. The change of diet would bring about a better health, and perhaps even more pleasure in the taste of meat. Whosoever will can even consider it as an expression of identity.