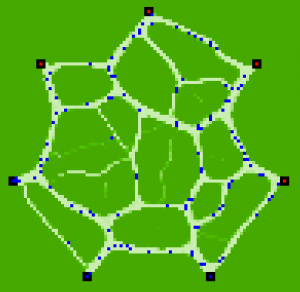 This map is an agent-based simulation result produced by NetLogo. It has been programmed years ago by a friend of mine, Alexios Kitsoupulos, from the University of Lausanne. What you see are paths produced in the green by people moving from one place to another. The basic rules are :

– Individuals use existing paths unless they diverge by more than α degrees from the direct line leading to their destination. (This idea was introduced and confirmed by spatial observations in psychology. α is a parameter of the model).

As simple as the model is, or perhaps because of its simplicity, its result remains fascinating. It illustrates to which extent many structures of our territories can actually be brought back to individual’s semi-conscious spatial schemes. The territory is a 1:1 map of the converging dimension of individual minds and bodies.

In this light, any spatial planning project (be it urbanism, architecture or transport engineering) appears as a translation of such a “1:1 map of the semi-conscious” into a conscious, verbalized, material reality. The quality of territorial projects should always be assessed regarding to their capacity to explicitate this translation.