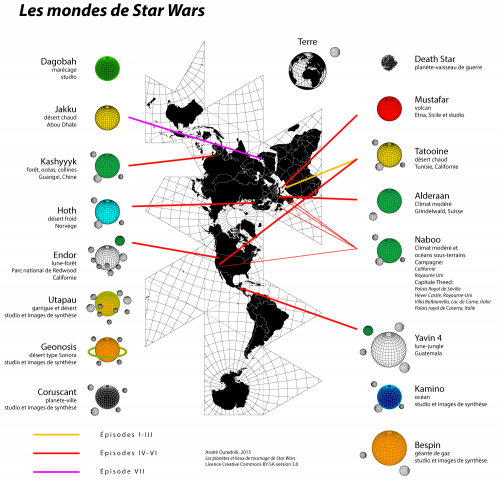 What is the biggest difference between the Star Wars planets and our Earth? Most have only one biome! On Earth, we have deserts, oceans, polar regions and tropical jungles. Star Wars dedicates an entire planet to each. Scientifically speaking, this model does not work because a planet never offers the same living conditions in its polar and its equatorial regions. A forest-moon like Yavin 4 is as unlikely as breathing on a planet devoid of vegetation as Mustafar, where Obi-Wan Kenobi cut the legs of Anekin Skywalker in a riot of boiling lava.

Did George Lucas forget about this issue while creating his world? On the contrary, he was very aware of these inconsistencies but the important, for him, was elsewhere. He wanted his mythological saga to reflect the realities of life. Up to us to decide which realities, because the film can be decrypted several ways. It also tells us a lot about ourselves, who enjoy seeing it.

First, because the myths are used to understand our world, they strive to simplify. In a globalized world, to understand anything, we tend to consider countries and cultures as monolithic: we forget their internal differences. We talk about Islam, forgetting all that stands between Shiites, Sunnis, Kharidjists, Ibadists or Sufi. We talk about China forgetting that the biomes of its territory spread from the rainforest to the taiga, and that its people speak no fewer than seven languages. The Star Wars planets offer a similar simplicity: to each its people, its biome, its alignment with the forces of good or evil. Our enthusiasm for this image betrays an impatience to classify worlds in uniform categories. This trend is reinforced by our contemporary way of inhabiting space: frequent travelers by air, we are used to go from Stockholm to Jakarta without intermediate steps, as by hyperspace jumps. No wonder, then, that we imagine our world as a network of isolated planets rather than as a continuous territory. This experience contributes to the holiday fun, but let us not forget it took just one Earth to provide all the shooting locations of the galactic saga. 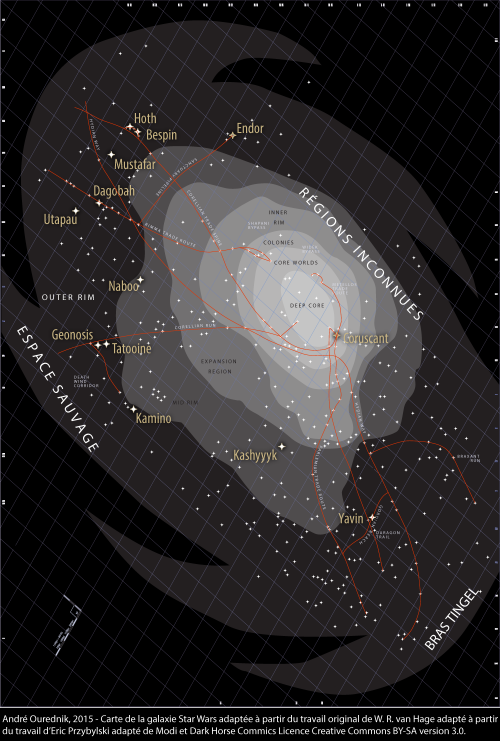 The planet of the Princess

One planet provides an exception to the monolithic construction rule: that of the princess. Princesses come from planets with temperate climates – like the unfortunate Alderaan of Leia, disintegrated by the laser of the Death Star – and more diversified in terms of biomes, such as the planet Naboo of Amidala, whose land shootings took place in no less than four countries on two continents. The person you love cannot be reduced to a single aspect: the places that represent her are many. Among the most romantic, George Lucas chose an Italian castle on the Lake Como and Caserta, with a cheeky wink to Veronian myth of Romeo and Juliet whih ends, too, by the tragic defeat of the young lovers.

The victory of nature

The simplest of all the planets, finally, is the Death Star: a construction of pure reason, it is strictly devoid of nature. Nothing in it escapes the power of decision of the Galactic Emperor. It is the perfect embodiment of death: the undivided domination of the rational mind over the body; the rejection of the unknown into which grows anything that lives. It is the dream of a final and strictly technical response to all questions of the galaxy. What we call nature is its exact opposite. Nature is the part of the Universe beyond the political decision-making power of a planetary architect. The victory of the Rebel Alliance over the Empire is the victory of such nature: the victory of the love of the unknown, the multiple and the diverse on the simplicity of peace of scrap.

This text was first published in French in the special issue of Le Matin, Tamedia publications romandes S.A., Lausanne, on Wednesday, December 16th 2015.