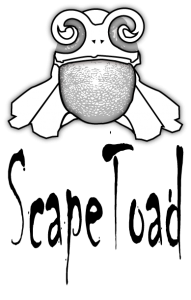 Most 2D-maps are used to represent topographic metrics: distances and areas measured on the map (multiplied by the map scale) give traveling distances and land surfaces. In some cases, this information is irrelevant or even misleading [see an example]. As a cartographer, you may wish to use map metrics to represent other data, such as human populations or amounts of produced resources. This is what ScapeToad is for.

A couple of years ago, I was happy to supervise the production of ScapeToad. The Java programming was done by Christian Kaiser. Its core code is based on the Gastner and Newman [2004] diffusion algorithm. Dominique Andrieu, from the University of Tours, France, was our tester. In case you wonder what the toad is about, well, I was looking for an animal that inflates its shape when designing the logo… If you try out the software, you’ll see what I mean.

While all three of us discussed the conception of the software, we stumbled upon a theoretical – and to some extent philosophical – problem: is it right to say ‘anamorphosis‘ to describe what our software does? While this term is widely used for density-equalizing population cartograms, one must recall that its Greek meaning is “deformation”. Can a geographical space be “deformed”? For one, the term has a negative connotation. More importantly, it implies that there is something out there to be deformed; some original space from which our deformed representation derives.  Clearly, in philosophical terms, this is a realist stance. I hope we all agree that geography is done with realism by now. Two acceptable positions remain: phenomenology and pragmatic positivism (the latter is often mistaken for realism, but this is another problem). In both cases, there is no such thing as an original base map to refer to. There is no ontological hierarchy, no transcendental relation between a social space of populations and a topographic space of the Earth. So shouldn’t we rather talk about transformation, i.e., about “metamorphosis” when moving from the one to the other?

For a long time, I’ve been in favor of that opinion. Today, I think otherwise. The reason is: calling a density-equalizing cartogram a “metamorphic map” clearly overrates its theoretical scope. Cartograms do not overcome the topographic space. They do not put social and topographic space on equal grounds. On the contrary: they participate to the reification of topographic space as the original territory. By doing so, they are a part of what I call a realist drowsiness of geography. Why? Because their use insists on the importance of topographic topologies. The whole point in a software like ScapeToad is to keep the topologies of the original base mapintact. Things that were side by side, topographically speaking, remain side by side. In a density-equalizing cartogram, these relations of topographic adjacency are treated as a fundament of geographical relatedness. Here we are, stuck with the old geographical saying that “things that are closer have more influence on each other”, and displaying our inability to ask what actually “being closer” means. As if we had forgotten that there are many ways to measure distance and that topography is only one of them.

One might object that any base map can be taken as a starting point of a ScapeToad “transformation”. This is true. But all cartograms produced with ScapeToad I’ve seen up to now use a topographic base map. While taking population sizes seriously, none of these cartograms actually questions whether topographic adjacencies actually mean anything in terms of relations between the mapped populations.

To overcome the unbearable evidence of topography, we must go one step further. This step might consist in more sophisticated position of things in space, such as multidimensional scaling, based either on mobility flows or on direct social connections between individuals. In the upcoming years, Open Graph technology might provide just the data geographers need to search in that direction. With François Bavaud of the University of Lausanne, we are currently working on a multiscale mobility-based analysis of the Canton of Valais. We will try to combine our results with cartogram techniques.

So there will be more to hear about ScapeToad. The “only” thing to work on is the base-map. In the meantime, don’t let the user-friendly ScapeToad lure you into theoretical drowsiness. All it does is to deform a given: it slightly stretches the original base-map to give more importance to the population variable. In mapping political results, this deformation is necessary. People vote, not square miles. Anamorphosis is a major step in votation results mapping. But it remains anamorphosis; it always refers to an original base-map which has to be produced and theoretically founded before its density-equalizing deformation.

Reference: Gastner, M.T. and Newman, M. (2004). Diffusion-based method for producing density equalizing maps. In Proceedings of the National Academy of Sciences of the United States of America, 101(20): 7499-7504.