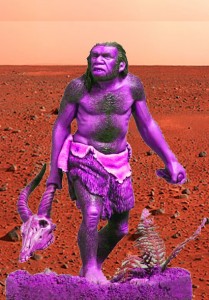 “Allopatric speciation” occurs when a biological species divides in two distinct populations, due either to the emergence of a natural boundary (river, mountain) or to migration in opposite directions. Over hundreds of generations, the genotypes of both populations evolve on their own until, finally, they become two separate species.

For some species of fruit-flies, this operation takes but months.  For squirrels separated by drifting continents and floods, it takes hundreds of thousands of years. But how about the human species?

We might soon get a chance to figure it out. Or at least as soon as we get to Mars.

November 2011 shall be the month of the Red Planet: the crew of Mars500 will emerge out of its 520 days of simulated travel; two real probes (Phobos-Grunt and  Curiosity) shall be launched later on. These events remind us that Mars travel constitutes a real possibility; its colonization a thinkable horizon of  human action.

However, if humans colonize Mars, and if they survive, they will be lost to most of us. Relatives at 56 millions of kilometers are not the ones you get to see every weekend. They will live their separate ways, develop their distinct survival strategies, their distinct pathologies. Within two or three hundred years, it will be dangerous to visit these remote humans, as our immune systems won’t be apt, anymore, to deal with the unique virus mutations that will occur in the Mars colonies. We will end up living separately, dying separately and will eventually evolve into two separate species.

What will happen then? Will the “Martians” communicate with us? Enslave us? Exterminate us, like the homo sapiens sapiens perhaps did to the homo sapiens neanderthalensis ? Or will it be moral, for them, to farm and eat us, as much as we find it morally acceptable to eat other species today? Will we drift so much apart that we will be to them what pigs, dogs and horses are to us? Will it then be perverse for them, to copulate with earthlings, will they call this “androphilia” and spit and sneeze with despise? Will we drift from racism to specism? Will we found a universal community of sentient beings? Or will our misunderstanding become so great that we’ll eventually lose all interest in each other? How will we deal with the radical otherness of those that have once been exactly like us?

These are the great social questions of Mars. The planet named after the God of War could one day grow to meet its name, but it can also lead us to re-evaluate all our values. Perhaps the mere thought of it can too: the thought of Mars, our most challenging hypothesis.

The Mars society. The purpose of the Mars Society is to explore and settle the planet Mars.

“Can people go to Mars?” in Science@NASA.

MarsNews, Newswire for the new frontier.